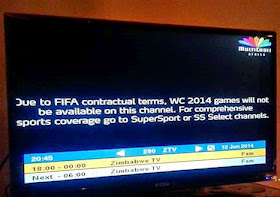 There's television drama across sub-Saharan Africa's pay-TV and television biz as StarTimes and Zuku TV allegedly stole the football feed of the 2014 FIFA World Cup without having the rights to it, while MultiChoice Africa is blacking out and pulling free-to-air (FTA) TV channels in several countries from the DStv platform which are showing 2014 FIFA World Cup soccer with rights they legitimately acquired.

Only KBC was authorised by FIFA to broadcast 2014 FIFA World Cup matches in Kenya as a FTA broadcaster, as well as MultiChoice and SuperSport which is showing it on subscription television on DStv and GOtv.

"The rest do not appear to me to have any relationship with the soccer] organisation," said judge Eric Ogola granting the court order.

StarTimes and Wananchi using the FIFA content on its pay-TV platforms, have allegedly breached the licence agreement between KBC and FIFA.

KBC says that the two pay-TV operators broadcasting its signal of the 2014 FIFA World Cup matches it secured, will jeopardise its business since viewers won't feel compelled to tune in to KBC for the exclusivity it paid for.

StarTimes allegedly went as far as hacking into KBC's terrestrial TV feed and pirating that signal to broadcast 2014 FIFA World Cup coverage on its pay-TV platform to not just viewers in Kenya but also in Uganda and Tanzania.

StarTimes and the others could now possibly be sued.

Meanwhile StarTimes blatantly lied to the public and StarTimes subscribers, telling them that StarTimes will be showing 2014 FIFA World Cup matches live from the beginning until the end of the tournament - without actually having any rights. 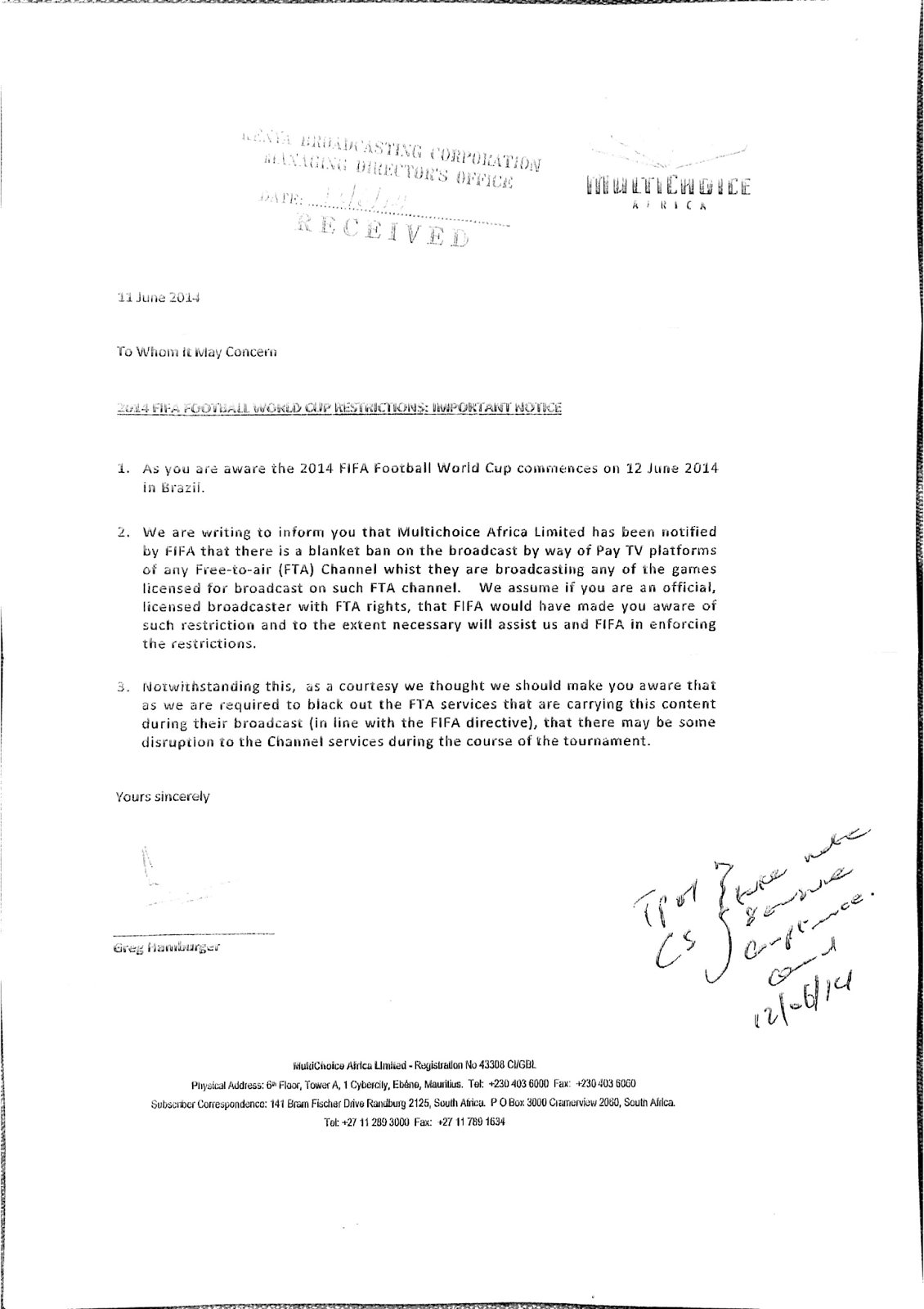 These broadcasters legitimately secured the FTA rights to the 2014 FIFA World Cup matches in their respective countries.

While viewers can now see ZBC and NBC as terrestrial channels (only) during the soccer, their signals on DStv are terminated.

On 11 June, right before the 2014 FIFA World Cup started, MultiChoice Africa suddenly sent this letter (right) (click to enlarge) to public broadcasters across Africa, like KBC and NBC in Kenya and Namibia, explaining why FTA channels showing soccer World Cup matches on DStv will be going dark and will be blacked out.

"ZBC wishes to apologise to its viewers receiving the ZBC TV signal on the DStv platform for interruption of transmission since the beginning of the World Cup Brazil 2014," says Clifford Mfiri, ZBC's head of production and TV services, in a statement.

"ZBC has received correspondence from MultiChoice Zimbabwe to the effect that they have been notified by the world football governing body, FIFA, to effect a blanket ban on all free-to-air TV channels broadcasting the games".

"ZBC has acquired the rights to the tournament and is broadcasting all 64 matches and it is accessible through terrestrial TV where viewers need a normal aerial and not a satellite dish to receive the ZBC signal. Any inconvenience is sincerely regretted."

The same is happening in Nigeria for instance with broadcaster AIT where viewers can watch 2014 FIFA World Cup matches on AIT's terrestrial broadcast but see a blacked-out channel on AIT on DStv. 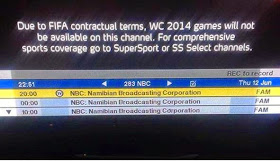 Meanwhile the Namibian Broadcasting Corporation (NBC) is furious with MultiChoice Africa over the black-out issue and its channel not being available on DStv to viewers in that country, saying that the NBC has had "lots of run-ins in recent times" with MultiChoice.

NBC's director-general Albertus Oachamub on Thursday said that MultiChoice Namibia suddenly cancelled NBC's signal on DStv after NBC announced that it acquired the 64 soccer matches from FIFA to show free-to-air.

"At the eleventh hour, just a couple of hours before we were to go live with our broadcast, they've decided to let us know that this is going to happen [NBC signal cut and going black on DStv]," said Albertus Oachamub in a television interview.

"What makes the matter a bit more complicated is the fact that this message is relayed to us at the eleventh hour and therefore we could not have warned all our viewers that receive us through the MultiChoice bouquet".

"We have had lots of run-ins in recent times with MultiChoice. Therefore I'm saying that a last minute announcement like that, makes one wonder if it is really, genuinely for the reasons in the letter that they have sent," said Albertus Oachamub.

"It smacks of some sort of sabotage, a deliberate attempt to make NBC look bad. And definitely this does not sound of good partnership".

"But we will consider all our options, because it is not right that our viewers have to be impacted in this way, especially shortly, just literally two days after we've said we're going to be carrying all the games live," said Albertus Oachamub.

It's not clear why the SABC in South Africa on MultiChoice's DStv platform is not affected in the same way as ZBC, NBC and others across Africa.

The SABC as a public broadcaster is showing the 2014 FIFA World Cup matches as a terrestrial broadcaster, but these matches can also be watched and are not blacked-out on MultiChoice's DStv as well as On Digital Media's (ODM) StarTimes which are pay-TV services in South Africa, as well as on Platco Digital's OpenView HD (OVHD) which is a free-to-air direct-to-home (DTH) satellite TV platform.
on 1:34:00 PM
Share
‹
›
Home
View web version