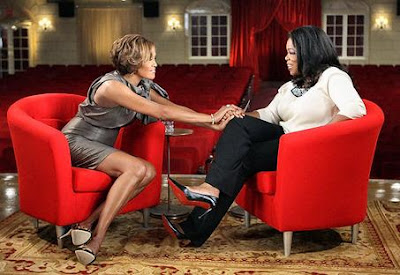 You're reading it here first. SABC3 has The Oprah Winfrey Show already as a weekday talk show and today re-confirmed what I already told everyone, namely that the new season will start in January.

But SABC3 is now NOT content to wait until then. At least, not for a certain episode. Or two.

The new season that just kicked off in America, starts with a special two parter, which ran over two consecutive days, of Oprah Winfrey's exclusive sit-down interview with Whitney Houston.

SABC3 is now in high-level negotiations with Harpo and the international distributor to get those two episodes of Oprah, interviewing Whitney, as soon as possible. SABC3 wants to get special permission to lift those two episodes and broadcast them for viewers as soon as is humanly possible. SABC3 will then show them again later, when the normal new season starts at the beginning of 2010.

''We want to get Oprah's Whitney interview earlier. As soon as possible,'' SABC3's head of publicity, Gesh Conco told me this morning.
on 4:09:00 PM