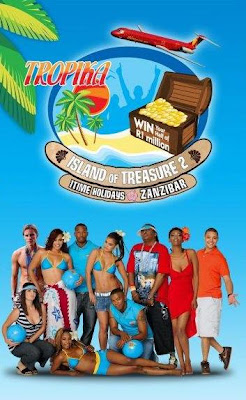 You're reading it here first. SA swimmer Roland Schoeman has quit the Tropika Island of Treasure 2 reality show (Brought to you by e.tv! Brought to you by Tropika! Brought to you by 1time!) going out on e.tv from 18 October. So what will now happen to people who paid and sent in SMS votes for R2 to possibly play and team up with him specifically?

I blogged this past Friday about my MAJOR BEEF with the lame way in which those behind the scenes screened the press, asked them ''to register your interest'' and required media to say beforehand what value and coverage they can promise upfront before they'll be invite to join the show on the island. (Read: allowed to go with this advertiser funded show).

Now there is this as well: Tropika and e.tv made a big fuzz about one of the contestants being Roland Schoeman. People can enter to team up with a celebrity. You have to enter by sending an SMS to 34112. It cost R2.

Now Roland, the biggest celebrity in the contestant pool has quit e.tv's reality show. Before it has even started. He's in the cast pic first on the left in the back row.
''Due to Roland Schoeman's swimming committments he has unfortunately withdrawn from Tropika Island of Treasure''.
Tropika scrambled to replace Roland with 7de Laan's Hendrik Cronje who plays Lukas.

So, what will happen now to contestants who SPECIFICALLY decided to enter because Roland Schoeman was a contestant, and SPECIFICALLY sent an SMS with his name?
Will they all get their money back? Can Tropika keep the money of people who entered a competition of which the terms and conditions has now changed?
on 11:08:00 PM